I read a lot of classics as a kid, but somehow never read anything by Oscar Wilde. I also haven’t read many plays beyond Shakespeare’s works. (Honestly, until I picked the book up, I’m ashamed to say I hadn’t even realized it was a play!) However, I am a big fan of Stephen Fry, who seems to be a big fan of Oscar Wilde’s, and so, I decided to give this book a go. 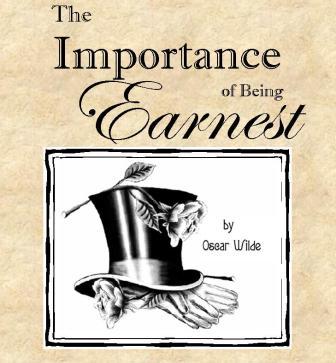 I’m an avid fan of Stephen Fry’s for many reasons which could be discussed in a long blog post all on its own, but one of the things I enjoy is watching him discuss language. I’m someone who cringes a bit when I see a grammatical error or an unrefined metaphor. However, I also quite agree with Fry’s take on language – that it is ever evolving and there isn’t much point on getting held up on small errors as long as the point is clearly coming across. In fact, playing with the meanings of words and phrases can be fun, and it is something that Fry has done endlessly in his comedy sketches and that Oscar Wilde does prolifically in The Importance of Being Earnest. If you’ve ever seen “A Bit of Fry and Laurie”, read a few pages of this play and you’ll see instantly where some of their inspiration came from. As another comparison, think Amelia Bedelia for adults.

My main draw towards The Importance of Being Earnest, was that Fry mentions a line from it in many of his interviews. One of the characters says to a lady he is enamored by, “Would you be in any way offended if I said that you seem to me to be in every way the visible personification of absolute perfection?” As Fry discusses in the clip below, this is such an unexpectedly poetic use of language. Individually, the words (“offended”, “visible”, “personification”, “absolute”, “perfection”) are clunky and not necessarily the first words that spring to mind when coming up with a romantic turn of phrase. However, altogether, Wilde has built a memorable, charming, and yes, poetic, sentence that would catch anyone’s attention. It is just this clever sort of use of language that I love, and this book is chock full of it.

The Importance of Being Earnest centers around two friends, Jack Worthing and Algernon Moncrieff, both of whom enjoy occasionally galavanting as fictional alter-egos. In fact, Algernon initially only knows Jack as his alter-ego, Ernest Worthing. Jack created the character of  his fictional brother, “Ernest”, as a means of avoiding responsibilities in his country village home and having fun in London (where Algernon lives).

Jack is hoping to propose to Algernon’s cousin, Gwendolen, who is impressed with Jack primarily because she thinks his name is Ernest. Algernon suspects Jack/Ernest of leading a double-life and when he comes clean, Algernon decides to have some fun at his expense. Unbeknownst to Jack, Algernon travels to the countryside and meets Jack’s family under the ruse of  being Ernest, Jack’s troublesome brother. There, he falls in love with Cecily, Jack’s young ward, and all manner of confusion and hilarity ensues.

This is a play that I would love to see live. Wilde’s words are so clever that it is easy to imagine them being acted out on a stage as you read. The characters toe the line perfectly between infuriating and endearing. As classic literature goes, this play is a quick read and not too difficult to understand. I recommend it if you want to give the classics a try but still want something that’s light and funny. And, if nothing else, I highly recommend you watch the old clips of “A Bit of Fry and Laurie” on Youtube for a laugh. Below is one of my favorite sketches from the series:

Which classics do you love? Do you have any favorite plays? Are you a Stephen Fry or Hugh Laurie fan? Let me know in the comments below!

So much happy 🌞 #TBT can’t believe this was 5 years ago!
Five. 💥
What happened to Spring? brrrr... 🧥 📷 @raashpaash
Looking forward to a weekend of celebrating @rmenawat16 and then two evenings of workshop with Rukmini Vijayakumar!!! 😃 • • Two years ago, Radhika and I got to learn this challenging and creative Natesha Kauthvam from @dancerukmini and then perform it at the @noordanceacademy showcase this past Fall. Can’t wait learn more from Rukminiji next week. Radhika, I’m going to miss having you there SO MUCH, but I CANNOT WAIT to dance the nights away with you, celebrating your wedding 💕💕 #wrongbhajan #andsoitbegins #radhikaandpawan #idontknowtherealhashtag
Forecast says rain showers all day ☔️ • • There’s something about rain that brings out my inner child! 🧒🏾 As long as I don’t actually have to commute anywhere, how glorious is it to splash around a bit, play out a 90s Bollywood fantasy scene, and then cozy up in blankets listening to the drops on the window pane? Someone bring out the hot chocolate ☕️ • 📷 @raashpaash
#FBF / #10yearchallenge whatup @sanyathapa we old